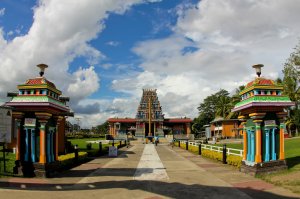 The temple is very peaceful, and located against a dramatic backdrop. It is said to be the largest Hindu temple in the southern hemisphere. The temple was built in the traditions of ancient Dravidian Indian Temple architecture and the principles of the Vastu Vedic tradition.

The first Indians were brought into Fiji in the 19th century to work as indentured labourers. This continued till early 20th century during the British rule. It is said that the first Murugan temple was built by Tiru Ramasami Pillai, and in those days, it was known as Periya Kovil. The temple was renovated through the 1980s and 1990s.