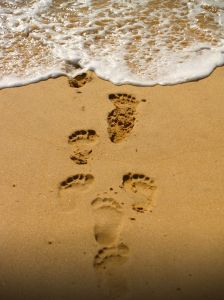 Bhagavan Siva revealed to Lord Vishnu who in turn informed Brahma and further down to Sanat Kumaras to Maharshi Narada and Vyasa that the steps to Salvation are basically four-fold viz. Sarupya ( Resemblance of Paramathma), Salokya (Being in the sphere of Paramatma) Sannidhya (Proximity to Paramatma) and Sayujya (Union with Paramatma) . Lords Brahma and Vishnu could certainly bestow the first Three Purusharthas viz. Dharma, Artha and Kama, or Virtuosity, Wealth and Worldly Desires respectively. But granting Moksha or Salvation is in the competence of Bhagavan Siva alone. He could also bestow Kaivalya or the Ultimate Stage, the knowledge of Siva Tatvam or Vilakshana / Nirguna Kind of Uniqueness which is not fully known to Brahma or Vishnu, Kumara and the Entirety of Maharshis.Siva Tatvam is described by Veda Vyasa as: Satyam Jnanamanantham cha Sacchidananda Sangjnikam / Nirguno nirupadhischaavyayah Shudho niranjanah (Siva’s everlasting form is of ‘Sat-chit-ananda’ or Existence, Consciousness and Bliss; it has no ‘Gunas’ or attibutes, nirupadhi (without features of Prakriti and Purusha), Avayah (Irreducible), Shuddha (Spotless) and Niranjana (Supreme Enlightenment). This Parabrahma is all pervading like sky; Mayatheetham Paratmanam Dwandaateetham Vimatsaram Thath Prapthischa Bhavedatra Sivajnodayad Dhruvam (This Paramatma is beyond Maya or Illusion, is only one and unique and has no traits like Matsaram or jealousy). To realise Paramathma is well-nigh impossible. The route is complicated by Jnana and Siva Tatvam that might sound too complex and confounding. But simple, sincere, fully dedicated Devotion (Bhakthi) could make miracles. Bhakti is another form of Selflessness, Sacrifice, Persverance, Loyalty, and Complete Surrender. Bhakti and Jnan are two sides of a coin. Yet one cannot claim to become a Jnani nor attain Moksha without Bhakti. Bhakti in pure form is a prerequisite to Moksha with or without Jnana. [‘Devaradhana Stotra’ of Adi Sankara stated that he was not conversant with Mantras, Yanthras, Hymns of Praise, Invocations, Meditation, Mudras, Stories of Your Glories and imploraions; yet, he knows how to follow Paramatma with Bhakti; thus the most essential features are faith and effort. ] But the advanced stage of Bhakti is automatically followed by Jnana in the sense that higher level of Bhakti is facilitated by minimal Jnana or working knowledge). In other words, Jnana per se without regard to Bhakti is not possible. Advanced Stage of Bhakti would face a ceiling without reference to required level of Jnana. Having said this, Bhakti would be of two Formats viz. Nirguna (abstract form) and Saguna (with physical form); also Bhakti is of either ‘Naishtik’ or without aiming at a specific desire or of ‘Anoushtik’ variety with desires.

On an enquiry about the variety of manifestations of Paramatma (The Greatest Soul), the doubt of identity of The Super Soul was whether of Brahma or Vishnu and Siva. Muni Sutha replied that at the Time of Creation, Paramatma had neither a form, nor Gunas (Physical Attributes) and nor name. That Supersoul was loosely called Siva. That Siva or Purusha was in Self- Union the Prakrithi. Together, they performed Tapasya or concentration in a huge ocean and that Sacred Place was known as ‘Pancha Kosas’ or the Five Sheaths. [Annamaya Kosa or Physical Body; Pranamaya Kosa or Prana /Linga Sarira or Vital Astral Sarira; Manonmaya Kosa or the lower Manas or Mind; Vijnana Maya Kosa or Higher Manas Kosa and finally Anandamaya Kosa corresponding to the Spiritual Soul or Buddhi] The Sixth Kosa enclosing the Pancha Kosas is Divine Atman. The Union of Siva and Prakrithi both created Hari Narayana (‘Nara’ being water) or who was spread over the huge water. From Narayana’s navel stood up a Lotus Stem and over the Flower was created Brahma. As there was conflict among the Trimurthis seeking inter -se superiority, Siva presented Himself as Maha Deva. He assured that all the manifes -tations of Himself were equally powerful and each of them was capable of giving boons to their devotees as well. They are like the same gold base but moulded into different ornaments. It was only notional that the tasks of Srishti, Sthithi and Laya were self assigned but each one of the Murthis is eqaully responsible. Similarly, there is no distinction between Siva and Rudra. Siva explained that Brahma created Rudra to perform the specific task of ‘Laya’, where as the Original and Unique Self, Siva is the Super Soul or Paramatma responsible for everything. Rudra is always prayed to but never prays to any body. Whoever prays to Lord Rudra, the strength and fruits of the Prayers are automatically transferred to Siva.