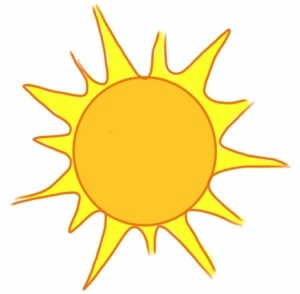 Meru mountain is in the North of the Dvipas and Varshas and hence when a person finds Sun rise, that direction is known as East since Meru exists to the left of the Sun. Existence of Sun (Surya) is eternal but one feels that He sets or rises since what is Sunrise to one is Sunset for another in the exactly opposite direction.Within 15 ghatikas or six hours, Sun travels 22.70 million Yojanas (one Yojana is 8 miles or 13 km) which is the distance from Indrapuri to Yamapuri. Sun’s chariot travels at the speed of 14.2 million yojanas a Muhurtha (There are 30 muhurtas in a day). The Chariot driven by Arunadeva has seven horses named after the ‘Chhandas’ viz. Gayatri, Usnih, Anushtubh, Jagati, Brihati, Trishtubh and Pankti and Aruna Deva sits facing the Sun God. On the Chariot sit sixty five thousand Valakhilya Rishis of thumb size chanting Veda Mantras, besides innumerable Sages, Apsaras, and Devatas. Sun’s chariot has 28 million miles long and 7 million miles wide. It takes two months for Sun to cover two constellations (Aries, Taurus, Gemini, Cancer, Leo, Virgo, Libra, Scorpio, Capricon, Aquarius, and Pisces) of Zodiac covering each of the six seasons in a year, viz. Vasanta Ritu, Greeshma Ritu, Varsha Ritu, Sarad Ritu, Hemantha Ritu and Sisira Ritu. The path of Sun at the end of the first half of a year changes upwards called ‘Uttharayana’ and when Sun moves downwards is ‘Dakshinayana’. When Sun with Earth and Heaven takes a complete circuit of Zodiac, it then takes a full ‘Vatsara’. A Vatsara denotes the movement of Sun by three kinds of speed viz. Seeghra, Manda and Samanya or fast, slow and normal in five time frames viz. Samvatsara, Parivatsara, Idavatsara, Anuvatsara and Idvatasara. Moon (Chandra) is situated one lakh yojanas higher than the Sun and is regulated by Sun’s movements and speed as also cooresponds to the Dark and Bright phases of ‘Krishna Paksha’ and ‘Sukla Paksha’ or the Dark and Bright movements of Sun. Moon is the Lord of Nights and is symbolic of medicinal plants, good health and fulfiller of desires during the Sukla Paksha of a month ending Pournami, human desires, ‘Sankalspas,’and good health corrsponding to Manonmaya and Annamaya; while ‘Sarvomaya’ provides happiness from Devas and nourishment to ‘Pitru Devatas’. ‘Venus’ (Sukra) is two lakh yojanas above Moon and traverses along with or ahead or sometimes behind Sun and is invariably beneficient to all including humans and denotes success, prosperity, good rains and health. Mercury or Bhudha, the son of Moon, is again situated two lakh yojanas above the planet of Venus. His velocity too assumes the three stages of Seeghra, Manda and Samanya. When this planet is away from Sun, there would be bad times of natural calamities, like ‘Ativata’ (huuricanes, sand cum hail storms etc), ‘Abhra pata’ (meterioc falls from the skies) or ‘Akala’ (drought). Mars or ‘Mangal’, the son of ‘Pridhvi’ or Earth is two lakh yojanas above Mercury and is generally considered as a manvolent Planet travelling three fortnights in each Rasi when its motion is not retrograde, creating tension, mischief and ill-health. Jupiter ( Guru) too is two lakh yojanas above Mars, who passes through each Rasi once a year and is beneficient when his motion is not retograde. Saturn (Sani) son of Sun again above two lakhs yojanas above Jupiter and is invarialbly a malefic planet, creating unrest, confusion, and miseries, taking thirty months to pass through each Rasi. Some eleven lakh yojanas higher than Saturn is Sapta Rishi Mandala ( the Great Bear) who is kind and just to those to practise a virtuous living.

Dhruva Mandala (The Pole Star) is thirteen lakh yojanas above the Sapta Rishi Mandala where Bhagavan Vishnu’s Holy Feet rest and is the permanent residence of Dhruva (the Illustrious son of King Uttanapada, who performed unprecedented Tapasya since he as a child was spurned by his step mother and also by the consent of his father and was guided by Narada Muni to please Narayana Himself and carved a prize position as a Pole Star on the skies far above the Sapta Rishi Mandala). Maha Vishnu Himself made the exclusive dispensation for Dhruva by making him the pivot of all the planets, Stars and innumerable luminary bodies as the Pole Star! It is believed that the ‘Zodiac’ or the Jyotish Chakra firmly holds on all the heavenly bodies and the central position of the axis is in the Dhruva Mandala. ‘Sisumara’ , literally meaning the killer of a Child has the body of a dolphin held integrated by the Union of Prakriti Shakti and Purusha. The contents of the Sisumara Chakra or the dolphin like body includes the Pole Star at the tail, which was also witnessed at the tail position by Lord Brahma, being prayed by Indra, Agni and Dharma. The waist of the dolfin like body of Sisumara contains the Sapta Rishi Mandala. As the coil of the dolphin like body rests on the right side, the fourteen Uttarayana Nakshatras from Abhijit to Punarvasu are found on the left side and fourteen Dakshinayana Stars from Pushya to Uttarashadha on the right side. Sisumira’s back is the Holy Ganges named Ajaviti. Punarvasu and Pushya on the loins on either side. Ardra and Aslesha form the right and left feet; Abijit and Uttarashadda form the right and left nostrils; Sravana and Purvashaddha right and left eyes; Dhanishtha and Moola right and left ears; Magha and the remaining Dakshinayana stars form left side bones; Mrigasira and the rest the right side bones of shoulderes. Agasti forms the upper jaw and Yama the lower jaw, Mars the face, Saturn the organ of generation; Brihaspati the shoulder humps; Sun the breast, Narayana the heart, Moon the mind, Aswini Kumars the nipples, Mercury the Pana and Apana airs; Rahu the neck; and Kuber all over the body. Thus the Sisumara is the composite body of Devas and Bhagavan Himself. One should meditate it in the morning, noon and evening.

Rahu Mandala is situated an Ayuta (ten thousand) yojanas or eighty thousand miles under the Sun. Keeping the ancient enmity between Rahu on one hand and Sun and Moon on the other, periodical Solar and Lunar eclipses do take place as visible to human beings on the Skies as Rahu takes vengence since Sun and Moon complained to Maha Vishnu in the disguise of Mohini Devi at the time of distribution of ‘Amrit’ the everliving elixir, since Rahu a Danava swapped the Devas queue by deceipt and Vishnu administered His Sudarsana Discus to and cut Rahu’s head who was revived as he had already consumed the elixir and was made one of the Planets. Underneath the Rahu Mandala are the Lokas of Siddhas, Vidyadharas and Charamas admeasuring an Ayuta Yojanas.Yakshas, Rakshasas, Piscachas, Pretas and Bhutas reside on the Antariksha where fierce winds blow and clouds appear too. Thereunder is Earth measuring hundred yojanas or 80,000 miles. Below the Earth, there are the sub terranian places, called the Bilva Svarga comprising seven Regions known as Atala, Vitala, Sutala, Talatala, Mahatala, Rasatala and Patala, where Daityas, Danavas, and Snakes live in. Atala is known for physical lust as Bala the Danava Maya yawned thus emerging Pumschali (unchaste women), Svairini or adultress and Kamini or woman of lust and these with the help of Hatakarasa (love potion) enjoy eternal lust. Vitala is known for Hataka or gold jewellery and Sutala is the region of Bali the Danava King who conquered Indra and Devas but Vamana suppressed him and Bali created Bilva Swarga. Talatala is the land of magic powers. Mahatala is the land of fierce multi headed snakes like Kaliya and Taksha and Rasatala is the region of Daityas, Danavas and Asuras, the progeny of Kadru and Patala is the place of Vasuki, the Chief of powerful and vengeful snakes and deep down underneath is Bhagavan Anantha Deva Himself!