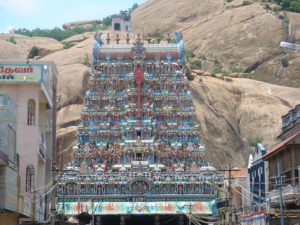 Thirupparankundram Murugan Kovil, Madurai is dedicated to Lord Murugan, the son of Lord Shiva. The temple is an architectural delight, and is a rock-cut temple thronged by devotees all round the year. The temple was built in the 8th century by the Pandya kings. The temple is one of the six sacred abodes or ‘Arupadi Veedu’ of Lord Murugan (Thirupparamkundaram, Thiruchendur, Palani, Swamimalai, Thiruthani, Pazhamudircholai).

It is said that the celestial wedding of Lord Murugan and Devayani, the daughter of Indra, took place here.

Murugan represents Gnana Shakthi or Power of Knowledge. He is also known as Subramanya, Karthikeya, Skanda Kumara, Saravana, Senthil, Shanmugha, Guha, Velan, and Swaminatha. Murugan is the Tamil god of war, and patron of Tamil Nadu.
The cave temple dedicated to the element of earth and mentioned in various classical Tamil texts as the ‘Southern Himalaya’ where the gods assemble, Tirupparankunram is also mentioned in legend as ‘the place where the sun and moon abide’.