Sage Markandeya referred Muni Jaimini to the Holy Birds to reply queries regarding Maha Bharata; the Holy Birds clarified the doubts about Mahabharata as also narrated to dialogues between Jyatismara Sumati and his father and Bhagavan Dattatrreya with King Alarka. Now, a Group of Munis put a volly of questions to Sage Markandeya concerning the Creation of Universe and its Destruction; the Origin of Devas, Rishis and Pitruganas; the Origin of Manvantaras; Celestial Families; the Under-World and so on. The Sage replied that as Avyakta (Unknown) Brahma appeared with four heads reciting Four Vedas and other Scriptures and his ‘Manasa Putras’ or Mind Born Progeny were generated, viz. Bhrigu, Parasara, Pulasthya, Pulaha, Kratu, Angirasa, Marichi, Daksha, Atri and Vasishtha, besides Sanaka, Sanandana, Sanatana and Sanat Kumara etc. Among these, Bhrigu handed over ‘Purana-Grandha’ to Chyavan Muni. Daksha too gave one and the Purana which was available to Sage Markandeya was what was being followed for the enlightenment of the Rishis at that time:

(He who is the root-cause of the Universe, is the unborn, enduring, the singular refuge of the moving and non-moving entities alike and the Creator is the Paramapada Swarup; He is the ‘Adi Purush’ or the Foremost Being who causes ‘Srishthi, Sthiti, Pralaya’(Creation, Preservation and Destruction), is unparalelled and Ever-existent. Having greeted this ‘Hiranyagarbha’ or the ‘Golden Bellied’ Supreme Energy with great veneration, the fantastic creation of the World is sought to be described, especially of those five kinds of Physical Features, Creation and characteristic attributes.
This ‘Bhuta Srishti’ (Creation of the World) being originated from ‘Maha Purusha’ is in a way permanent yet occurs in temporary and repetitive stages. Maharshis describe Bhuta Srishti as an incomprehensible and minutest manifestation of ‘Prakriti’, which is Endless, indestructible, and devoid of sensory features like Gandha (Smell), Rupa (Form), Rasa (Taste), Shabda (Sound) and Sparsha (Touch); it has no beginning nor end, is the producing point, the source of Three Gunas of Satvika, Rajasika and Tamasika nature, is the Vidyamaan (Embodiment of Knowledge) and is ‘Avigneya’ (Incomprehensible). Before the ‘Pralaya’ (the Great Destruction), He is the ‘Sarvaya Vyapi’or the Omni-Present. Sage Markandeya explained to Jaimini Muni further as follows: In the task of ‘Srishti’ (Creation), Lord Brahma visualised ‘Pradhan Tatva’ (Main Nature) which camouflages ‘Maha Tatva’ (The Great Nature) just as a seed is hidden by the skin of a vegetable. This Maha Tatva, with the assistance of ‘Trigunas’ produces ‘Ahamkar’ (sense of the Self). Ahamkar has three kinds viz. Vaikarik, Tejas and Tamas. Just as Maha Tatva camouflages Pradhan Tatva, Vaikarika Tatva hides away Ahamkara. The interaction of Ahamkar and Pradhan Tatva produces ‘Shabda (Sound) Tanmatra’. The Sound feature produces ‘Akash’ (Sky) as Sky possesses the same tendency of sound. Now, the Shabda Tanmatra hiding Akash interacts with Tamas Ahamkar and produces ‘Sparsha (Touch) Tanmatra’. Then the Sparsha Tanmatra interacts with Vaikarika Tatva of Ahamkar and creates ‘Vayu’ (Wind). The interaction of the Sky’s Shabda Matra, Skin’s Sparsha Matra and that of Vayu Matra creates Rupa Matra whose further interaction with Tejas Tanmatra creates ‘Jyoti’. The cyclic effect thus creates Rasa Matra leading to the formation of ‘Jala’ (water) and ‘Gandha Matra’ leading to the formation of ‘Prithvi’ (Earth), following the interface of the respective Tanmatras. Further on, the chain reactions of Tanmatras, Matras and Gunas manifest innumerable creations.Panchendriyas of Ears, Skin, Eyes, Tongue and Nose and Pancha Karmendrias of respective actions, besides the controlling mind were created. By the union of ‘Maha Purusha’ and His own alternate form, ‘Prakruti’, a Golden Egg was produced in the huge sheet of water and grew up gradually.This Egg is massive as it contains the ‘Kshetrajna’ who made the Fore-most Appearance as the Originator of ‘Bhuta ganas’ including ‘Pancha Bhutas’ (Five Elements).
Utpannah sa Jagadyoniguno rajo gunam,
Bhunjanpravartetye sange Brahmatvam Samupaasritah/
Brahmatvey sa prajaa srishta tatha satvaatirekavaan,
Vishnutvameya Dharmena kututhey paripaalanam/
Tattamogunodriktho Rudratvey cha khilam jagat,
Upasamdrupthya vai shethey Trailokyam Trigunogunah/
Yatha praagvyaapakah Kshetri paalako laavakastatha,
tathaasa Sangjaamaprothi Brahma Vishnu Haraatmikam/
Brahmatvey Srujatey Lokaanyudbhatvey samharastyapi,
Vishnutvey chaapyudaaseenastitrovasthah Swayambhuvah /
Rajo Brahma Tamo Rudro Vishnum Satvam Jagatpatih,
yeta eva triyo Devaa yeta yeva thrayo gunah/

(The merger of Purusha and Prakriti assumed Rajo Guna and created Brahma who in turn created Human Beings, while Vishnu assumed Satvika Guna to preserve the entire Universe and Rudra assumed Tamasika Guna to destroy the Universe. In this manner, the ‘Swayambhu’ or the Self-born, being ‘Nirguna’ or devoid of ‘Gunas’, executes the three kinds of tasks at the same time by assuming the features as and when exigencies occur, without leaving each other even for a ‘Kshana’(three blinks). 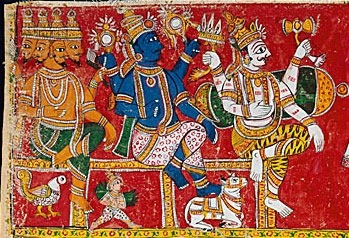