King Alarka opined that thanks to his brother Subahu and his associate Kasiraj, the tension created by them in his mind paved the way to approach Mahatma Dattatreya; indeed he had secured supreme guidance and relief from the Mahatma as he transformed his entire thinking process so as to convert a King as a Yogi. Alarka’s entire outlook has been changed to confer Kingship to Subahu and his supporter Kasiraj who were sworn enemies at one time now converted as admirers since their threats and the resultant mental tension had evaporated.Kasiraj replied that it was not an ideal situation because Subahu was a Kshatriya and his feature must have been that of a Kshatriya to fight but that was not to be.But, Subahu realised too the futilty of desire, wealth and fame and preferred adopting the Yogi route for accomplishing ‘Moksha’. Yogi Alarka returned to his Kingdom and made his elder son to take over the Kingship. Thus the entire generation retired to ‘Vanaprastha’. Yogi Alarka attained Salvation subsequently, said Jatismara Sumati to his father.The Holy Birds thus narrated the entire legend to Sage Jaimini, replying the question about the Evolution of Human Life. The fruits of reading the above would tantamount to performing hundred Asvametha Yagnas;

(Hearing the auspicious dialogue between Alarka and Dattatreya as narrated above demolishes all the sins and provides great security to those who read / hear it). 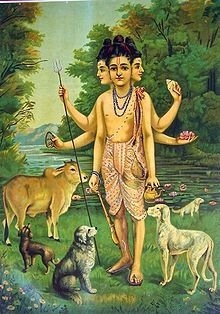