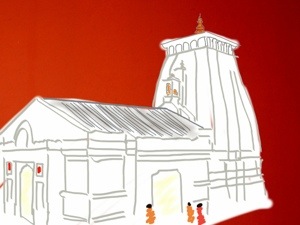 Flanked by breath taking views of snow-clad peaks of Himalayas at a height of 3585 m from Sea level on the banks of River Mandakini, Kedareswar is the highest point where Maha Deva’s presence is indeed felt in the manifestation of a famed Kedareswara Jyotir Linga as spread out as a fairly large expanse of black stone with an inclined elevation in the middle portion.

Being inaccessible excepting by a difficult 14km trek by foot, or horse back or ‘dolis’(palanquins) carried by two or four humans from Gaurikund, the Temple is open only during end April through November since residents, let alone pilgrims, have little access to the Mountain Top Temple during heavy snowfall in the intervening period. [A helicopter service is available now from Agastya Muni to Phata to reach Kedarnath].

The incarnations of Lord Vishnu in the form of two Sages Nara and Narayana meditated to Bhagavan Siva for several years and as the latter appeared and said that the incarnations of Vishnu Himself executed the penance without any basic reason excepting the welfare of humanity and thus agreed to manifest Himself as a Jyotir Linga at that hallowed place. Nara and Narayana are believed to have assumed their forms as hallowed mountains nearby.

According to Puranas, Pandavas performed penance at the Temple and even in the opening Hall of the Temple at the entrance of the Sanctum, there are idols of Pandavas, Lord Krishna, Nandi and Veerabhadra. The belief is that Pandavas were chasing a Bull- Lord Siva Himself- and Bhima continued the chase to subdue the animal by holdindg its tail and the Pandavas attained Salvation finally from the Temple surroundings. It is also believed that Adi Shankara attained His Salvation from this Place and there is a ‘Samadhi’ of His behind the Temple.

A distinct feature at the entrance gate of the Temple is the head of a man carved in a triagular stone as facia and a similar triangular facia is displayed in another Temple where Siva-Parvati wedding was fabled to have taken place. ‘Udakmand’ is mentioned in Siva Purana as a union of Seven Seas and its water is everfresh. In fact the Homa Kund of the Wedding is also visioned alive. On way to Kedar a number of Pigrimage Centers dot the route including Agastyamuni, Ukhimath, Phali-Pasalat Devi, Kalimath, and Triguni Narayan not far from Sonprayag.