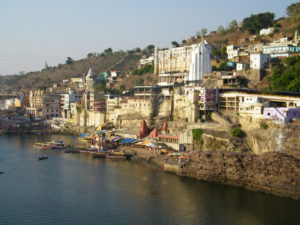 Situated in the banks of River Narmada on the Mandhata (Shivapuri) Island formed in the shape of OM in Sanskrit, Omkareswar is one of the Jyotirlingas besides another Amareswar Linga.

The Legend was that Sage Narada visited Vindhya Raja and the latter bragged that Vindya was the highest and most powerful Mountain in the entire World. Narada replied that perhaps Meru was the greatest in terms of height and might. Vindhya Raja felt jealous and executed severe ‘Tapasya’ and pleased Maha Siva and requested that He should always be present in the Vindhyas and establish a Linga of Bhagavan on the banks of Narmada near to Vindhya. Hence the Omkara Jyotirlinga there.

Puffed by Siva’s presence there, Vindhya Raja grew taller and taller to compete with Sumeru. This obstructed Sun God’s routine circumambulation of the Universe and He had to return half way turning half of the Universe dark. Bhagavati asked Sage Agastya from Kasi to visit Vindhya Raja who out of veneration bent down to touch the feet of Agastya who asked Vindhya to be in that position till he returned and he never came again from the South!